On Friday 7 June officers from the police, immigration administration and other public administration had the opportunity to hear more of our experiences on the fact-finding mission we had to India earlier this year.
Published: 6/24/2019 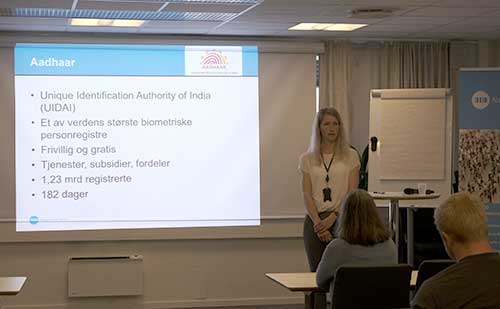 (Above: Kristin Moe, Norwegian ID Centre told a very attentive audience of around 30 people about Aadhaar, one of the worlds largest public registers.)

Conveying knowledge is a central part of Norwegian ID Centre’s activities. The ID Base is an example of a service where we give high priority to quality in such things as providing up-to-date information on new countries. 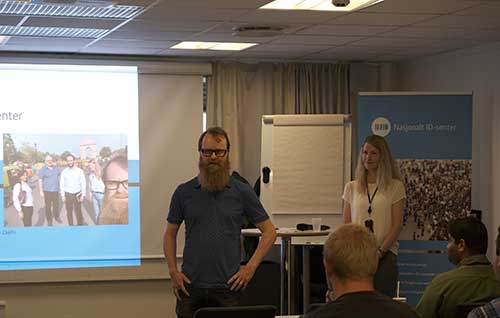 Friday 7 June was the date for a breakfast meeting with a presentation of highlights from the fact-finding mission that Trygve Aurdal-Vold and Kristin Moe were on earlier this year.Along with Torbjørn Hjelle Sørum  Form the Norwegian embassy in New Dehli, they took a closer look at how various ID documents are being administgered in a country of such a vast population. The geographical focus of the journey was in Delhi and Punjab.

We focused on registration of births and deaths, marriages and divorce. And also on Aadhaar and polytechnical education.

Along with colleague Kristin Moe and Torbjørn Hjelle form the embassy, he presented some highlights from the mission. Hjelle Sørum’s presentation included a look at the great variation in design and layout of Indian ID documents and also some of the challenges one is facing in trying to verify such documents.

The very attentive audience was also told about Aadhaar, whose 1.23 billion records make it one of the world’s largest biometrical person registers.

The purpose of Aadhaar is to use biometrics along with other information to verify ID, says Kristin Moe.

She also says that the very extensive register is based on how technology like specially developed QR codes and mobile applications is formed to make the information accessible.

Another topic for the presentation was the routines for registration od documents linked to births, deaths, marriage and divorce.

If you are a registered user of the Norwegian ID Centre portal you will find more about the experiences from the India fact-finding mission in the weeks to come.