ID Conference 2015: The deputy director of the Norwegian Directorate of Immigration, Birgitte Lange, opened the 4th annual ID Conference with a timely message for the audience.
Published: 5/6/2016 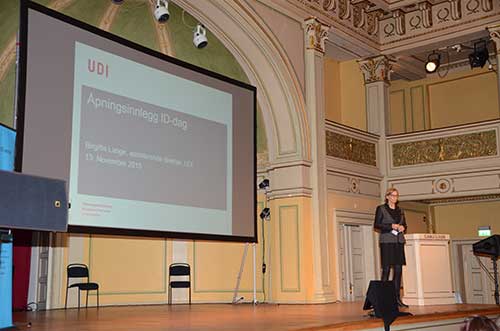 The theme for this year’s conference was the inspection of EEA documents, which proved to be a very topical issue given today’s refugee crisis. Roughly 200 people gathered at Gamle Logen in Oslo on Friday 13th November to hear Lange’s speech.

Lange orientated the capacity crowd with the latest news about the refugee crisis and the challenges it is creating for immigration authorities.

Lange’s message left the audience in no doubt about the gravity of the situation concerning the deluge of refugees flooding into Europe at the present moment. The enormous demands being made on the resources of organizations dealing with the crisis was also a focus.

‘The asylum situation is highly challenging, and co-operation is decisive,’ Lange explained during her speech.

The situation facing the immigration authorities has changed radically in a short space of time. While the main challenge has been to house refugees, the Directorate is also experiencing increasing numbers of enquiries from the general public.

Lange informed the audience that the Directorate’s caseload has quadrupled since the crisis began. They are also facing 100 enquiries from the press each day.

Lange explained that the authorites face two main challenges. The first is to find enough beds for all of the new arrivals.

The second challenge has arisen at the territorial border with Russia, at Storskog in the far north of Norway. The flood of refugees coming over the border here is putting a strain on the authorities.

‘We only have a fraction of the beds required to meet demand. The Directorate can’t solve this crisis alone,’ Lange emphasised.

The enormous numbers of refugees arriving at Storskog has also focused attention onto speeding up processing times for asylum applications. The Government put forward a proposal on Friday to prevent asylumseekers who already have residency in Russia from having their cases considered in Norway.

Lange also informed the audience that 150 new case administrators were expected to start working on applications in January. However the influx at present is so great that applicants should still be prepared for a long wait before their cases are treated.

The deputy director concluded by summarizing developments in the form of facts and figures. It is clear that a large percentage of the latest arrivals have come to Norway via the border crossing at Storskog. Over 1000 people arrived along this route last week. Many of these people are refugees from Syria, but there is also a constant flow of people from Afghanistan, Iraq, Egypt and Pakistan.

As a consequence of the huge number of arrivals, the Directorate has now decided to publish figures showing arrival figures for refugees on a weekly basis. A total of 2,502 refugees arrived in Norway last week, setting a new record.