Evaluation of ID control and assessment in Norway 2015

The Norwegian ID Centre has evaluated ID control and assessment carried out in Norway during 2015. Our report focuses on the reception centres at Tøyen in Oslo, Råde in eastern Norway and Kirkenes in the far North.
Published: 7/7/2016 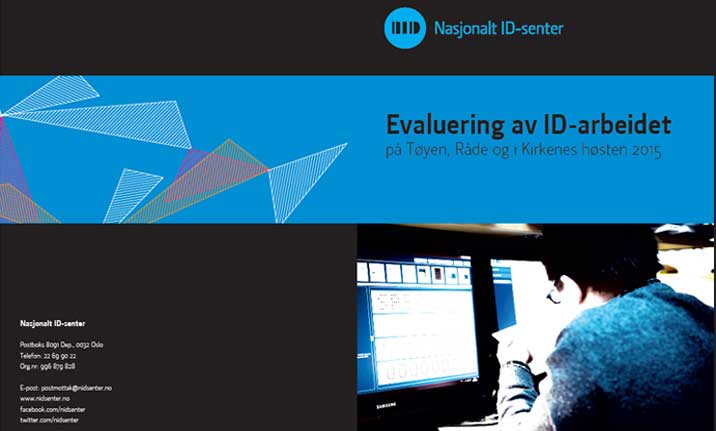 During Autumn 2015, record numbers of asylum seekers arrived in Norway. A total of 31,145 asylum seekers were registered in 2015, as opposed to 11,840 in 2014. Neither the immigration authorities nor other government departments were prepared for the huge increase.

Commenting on this, the Director of the Norwegian ID Centre, Arne Isak Tveitan, said ‘It is very important for the Norwegian authorities to know the identity of people residing in Norway. Rapid clarification of identity is essential for the administration of immigrants.’

The Norwegian ID Centre has evaluated the ID assessment work that was carried out at the Migrant Reception Centres at Råde, Tøyen and Kirkenes (Storskog and Vestleiren) in Autumn 2015. Participants in the evaluation were: the Norwegian Directorate of Police, the Directorate of Immigration (UDI), the Immigration Appeals Board (UNE), the National Police Immigration Service (PU), Finnmark police district, East police district, the Police Security Service (PST) and the Norwegian ID Centre. All of these organizations were represented on the steering committee of the Evaluation Project, ensuring quality and commitment. The project entailed an evaluation of ID control routines carried out by each individual department as well as an assessment of the interaction between involved parties. It also included recommendations for improved, more effective ID assessment when faced with large numbers of asylum seekers.

None of the departments working within immigration administration expected the large numbers of asylum seekers who arrived in Norway in 2015. Their Emergency Response Plans were insufficient to deal with the challenges that arose, in particular issues of co-operation between departments and the delegation of responsibility. As a result, they were unprepared to do a satisfactory job of assessing ID at that point in time.

The Directorate of Police should have supplied the necessary resources to cope with the demands of the situation earlier in proceedings. The lack of personnel resulted in inadequate registrations. Some of the Heads of Department in different organizations were used in operative roles rather than leadership, with consequences for registration. At times, decisions were not communicated clearly enough within individual departments and between different departments.

During certain periods, the routines for registration procedures changed on a daily basis. The changes were not always made on a sound basis, or communicated clearly enough to all involved. Not all decisions were written down. The lack of written instructions led til differences in practical routines and uncertainty about correct procedures. There was insufficient communication between the Directorate of Immigration (UDI) and the National Police Immigration Service (PU) regarding the routines for ‘mini registrations’ and when they should be adopted.

One of the consequences of ‘mini registrations’ is that some cases which should have been treated under the Dublin III Regulation and sent to other countries, have instead been sent to the Norwegian authorities.

Østfold police district, the National Police Immigration Service (PU) and the Directorate of Immigration (UDI) all received extra financial resources to cope with the emergency, and they recruited many new employees. However, not all of the new employees in the National Police Immigration Service were given sufficient training, and they were given tasks for which they lacked the necessary competence. The same applies to the new employees of the Østfinnmark police district. There were not enough experienced staff members to assist the new employees, and at times this adversely affected registrations. A lack of equipment for recording biometrical information when registering asylum seekers, and insufficient access to and knowledge of the DUF system (a computerized system for handling immigration and refugee cases, used by the immigration authorities) further complicated registration procedures and the ensuing treatment of asylum cases.

Interaction and exchange of information

During one period, decisions were passed and registrations made in DUF without recording this information on computer. Communication between participants concerning the current situation, prioritization and filtering-out of cases, and which facts should be registered in each case, has not always been satisfactory. This also applies to communication within some departments. Many different participants have been involved in the ID assessment process and it has not been consistently clear as to which department has responsibility for each task. Meetings between the departments involved were implemented too late, which had consequences for the following-up of cases.

‘ID assessment’ covers the work done by different participants in immigration administration when registering, examining or establishing the identity of a foreigner.

This project was based on information gathered through interviewing 52 employees of the departments involved.

The findings of the earlier ‘ID Survey Project’ indicate that certain factors have more influence than others regarding ID assessment. These factors are also emphasised in this evaluation:

Interaction and exchange of information